Boules (French pronunciation: ​[bul]) is a collective name for a wide range of games similar to bowls and bocce (In French: jeu or jeux, in Italian: gioco or giochi) in which the objective is to throw or roll heavy balls (called boules in France, and bocce in Italy) as close as possible to a small target ball, called the jack in English.

Boules-type games are traditional and popular in many European countries and are also popular in some former French colonies in Africa and Asia. Boules games are often played in open spaces (town squares and parks) in villages and towns. Dedicated playing areas for boules-type games are typically large, level, rectangular courts made of flattened earth, gravel, or crushed stone, enclosed in wooden rails or back boards.To win a team must reach 15 points, with a few exceptions. 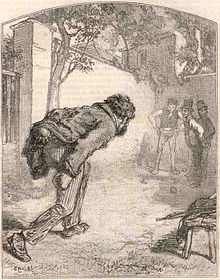 As early as the 6th century BC the ancient Greeks are recorded to have played a game of tossing coins, then flat stones, and later stone balls, called spheristics, trying to have them go as far as possible. The ancient Romans modified the game by adding a target that had to be approached as closely as possible. This Roman variation was brought to Provence by Roman soldiers and sailors. A Roman sepulchre (now in the Campana Collection in the Louvre) shows children playing this game, stooping down to measure the points.[1]

After the Romans, the stone balls were replaced by wooden balls. In the Middle Ages, Erasmus referred to the game as globurum in Latin, but it became commonly known as boules (i.e. 'balls'), and it was played throughout Europe. King Henry III of England banned the playing of the game by his archers – he wanted them to be practicing archery, not playing boules. In the 14th century, Charles IV and Charles V of France forbade the sport to commoners; only in the 17th century was the ban lifted.[2]

By the 19th century, in England the game had become bowls or "lawn bowling". In France it was known as boules and was played throughout the country. The French artist Meissonnier made two paintings showing people playing the game, and Honoré de Balzac described a match in La Comédie Humaine.

In the South of France, the game evolved into jeu provençal (or boule lyonnaise), in which players rolled their boules or ran three steps before throwing a boule. The game was extremely popular in France in the second half of the 19th century (the first official club was established in France in 1854). It was played informally in villages all over Provence, usually on squares of land in the shade of plane trees. Matches of jeu provençal around the start of the 20th century are memorably described in the memoirs of novelist Marcel Pagnol.

In 1910, an offshoot of jeu provençal called pétanque was developed in the town of La Ciotat, in Provence. It eventually became the dominant boules sport in France, and is widely played in other European countries.

Boules games may be sub-divided into two categories based on typical throwing technique:

Boules games may also be subdivided into two other categories based on typical throwing technique:

Alternatively, boules games may be subdivided into categories based on the structure and material of the ball:

Alternatively, boules games may be subdivided into categories based on the shape of the ball:

There may be other variations as well, for instance in the way the ball is launched, in the dimensions of the playing area, whether obstacles (such as trees) are considered in-bounds or out-of-bounds, and whether it is legal to play balls off of enclosing boards or obstacles.

Finally, some boules games (bocce, pétanque) began as variations of earlier games, deliberately created and designed to accommodate the needs of players with physical disabilities.

Such variations produce a wide variety of boules-type games played all over the world.

In Italian bocce, balls may be thrown in three ways: punto, raffa and volo.[3]

There is a wide variation in the size and materials of the balls used in boules-type games.

Originally, in ancient Egypt, Greece, and Rome, the balls were probably made of stone.

Gallic tribes, which were introduced to boules by the Romans, used wooden boules. In the 1800s in France, boules were typically made of a very hard wood, boxwood root.

In the mid-1800s techniques were developed for the mass production of iron nails. Following this technological improvement, boxwood balls studded with nails (boules cloutées) were introduced in an effort to improve the durability of the balls. This eventually led to the development of balls that were completely covered in nails, creating a ball that appeared almost to be made of metal.

By the 1920s, the growing popularity of boules in France created a demand that could not be satisfied using the available supplies of natural boxwood root, which were beginning to disappear. Paul Courtieu and Vincent Miles had the idea of manufacturing a ball made entirely of metal. Avoiding steel-based alloys (which were too hard and rust-prone) they developed an alloy based on aluminum and bronze, and (in 1923) patented a metal ball made of two welded-together hemispheres. A year later, in 1924, they filed a patent for a ball that was cast in a single piece -- La Boule intégrale. Louis Tarchier and Jean Blanc are generally credited with developing, around 1925, the process by which virtually all metal boules are manufactured today -- steel blanks are pressed into hollow hemispheres which are then soldered together and machined to make a hollow steel boule.[4][5]

Today, some boules sports (e.g. bocce) still use wooden (or epoxy composite) balls, while others (e.g. pétanque) use metal balls. The wooden balls used in bocce tend to be bigger than the smaller metal balls used in pétanque.

The same game can be known by different names in different languages and locations or the same name can be used for different local variations of a game.

The category of boules games includes

The Confédération Mondiale des Sports de Boules - CMSB - was created (on 21 December 1985 in Monaco) by three international boules organizations for the purpose of lobbying the Olympic committee to make boules sports part of the summer Olympics. To date, its efforts have been unsuccessful.[6] The organizations were: